We made it to the Bear Creek Cabin, which is about 32 miles short of Nikolai. Its been a wild ride as usual. Rainy Pass was windy, but not too bad. Visibility was a real challenge as the light was more than flat. I managed to flip my machine on its side twice. Good thing we were 2 people 2 bring it back upright. And also a good thing we went ahead on the dogteams, so we were not in anybody’s way.

Arriving in Rohn, it was nice to the Jasper Bond there, who is the Rohn major and was missed last year, when he could not come out. The 1st team in was Yukon Quest Champion Hugh Neff, cheerful as usual. He had Ellsworth in the sled basket and decided to drop him. He is an 8 time 1000 mile finisher.

Next in was Ray Redington, who seemed to be a bit undecided about short or longterm parking. Lance was right behind him. Once Ray saw that Hugh and Lance were both going to stay, he decided to do the same, but than later questioned that decision when we talked. Lance got a two thumbs up from the veterinarians for his dogteam when they gave him the vetbook back. Lance joked: “Last year here, I needed 2 vet books”, referring to the problems he had with his team in the past run.

Aliy Zirkle arrived and was focus. Short term parking. It took her all but 10 minutes to load up and go. She had obviously planned that move. She usually camps on the creek about 2.5 hrs out, at least that is where she camped last year. Aliy did not drop any dogs and they were eagerly barking to go.

Aaron Burmeister arrived with a nice team of 16 dogs. That is exiting for me to see, him having Grisman, Vasser and Saffron in the team. The vets in Rainy were a bit concerned about Moss in his team, but she looked more than happy in Rohn, her wiggly usual self. Aaron seemed to have a very good time. Right before we left the Checkpoint, the current Champion John Baker pulled in too. 6 teams in, time for us to leave, to not get stuck in too much traffic. Boy what a rough ride for the first 25 miles, than finally around Buffalo Camp it started snowing and the trail got much smoother. Off to Nikolai in the morning!! 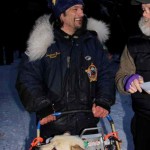 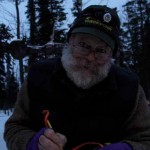 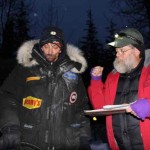 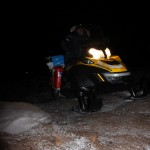 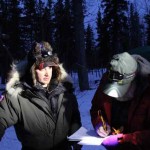 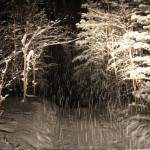 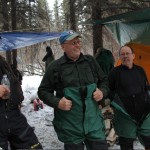 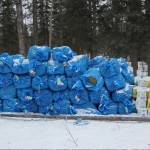 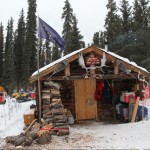 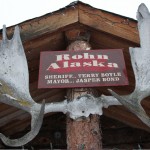 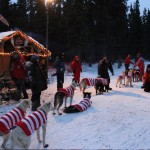 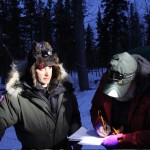 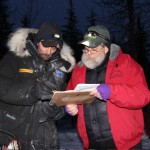 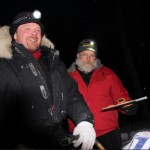