From Bear Creek Cabin we went to Nikolai. The Bear Creek Cabin is aptly named. Walking around it, there is no doubt that some bear uses it as a scratch post, with claw marks all over the place. Kevin, which I have seen many times on the trail over the years and he works with the Iditarod Historical Trail Committee, and of whom I still do not know the last name was at Bear Creek with his friend Dave. Both had some pretty interesting stories of the Iditarod Invitational Running and biking race.

Some 27 Competitors pulled out. On the cabin wall was a note of a German racer called Michael, calling for help, to end his odyssey. He must have been in a rough mental state when he wrote that, talking about hearing voices too. Sometimes I wonder, what makes people sign up for these extreme events and what they expect to find, when they plan on walking or biking 300 miles through Alaska’s wilderness in the dead of winter. Same as the mushers, one is bound to find out a lot about oneself. Good or bad. We passed quite a few teams leaving Bear Creek going towards Nikolai. At time passing is not easy with the trail being narrow. The closer we got to Nikolai, the higher the snow got. It is to the point that even the Super Wide track is having a hard time staying afloat. So far we only have been stuck one, Gerd and I both in the same hole. Aaron Burmeister came into Nikolai right at the same time as us, short after 11 a.m. His team looked chipper. He told me that Saffron is not eating, which is absolutely not like her. Taking a closer look, yeah she it fat. Humongous…. No wonder she is not eating. Where to go from here, seems to be the topic for most mushers. Hugh and Lance were toying ideas from Takotna to Ophir, both commenting on that it might be slow going. Aliy seemd to have solve that idea for herself, as she has already left. Gerry Willomitzer had some war stories from the Buffalo Tunnels, where he sheard both of his break claws off and lost his runner plastic on both runners. Others like Aaron Burmeister and Mitch Seavey lost their snowhooks. Aliy Zirkle fished Mitches out of the water, while Aaron was still hoping to get a new one here in Nikolai. Gerry had his eyes on Mike Williams spare sled to ask him for if he can take the break claws off. Takotna seems to be the favorite option in mushers plans for their 24 hour layover, as Mitch said: “ You can never go wrong there” it might not be the perfect choice, but it gives a musher a lot of options.

For now the snowfall has stopped and the sun is even trying to peak out a bit.

As for reporting. Its been a challenge. In Rainy there was definitely some protection on the internet access by VIP’s. In Rohn we could not get the Satellite to work, too many mountains. Finally at Bear Creek we could get the Satellite to uplink. In next to no time we reached the 20 MB max bandwidth. Yikes, $ 6.5 a megabyte. Here in Nikolai, they have a proxy server in the school, facebook is blocked and still no cell service. But for some reason my emails go out, although I can not surf the net, so this time I am sending out the report to friends who than hopefully can post it, together with some pictures and videos we too. My voice recorder is somewhere on the trail, I flipped the snowmachine on its side twice last night, so most likely somewhere there. Just scored a flip camera from Kyle from the AND, that will make life easier again. Gerd is out with the Camera to take pics of the teams leaving. 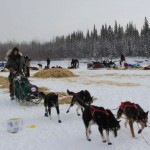 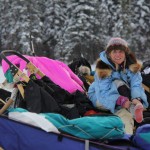 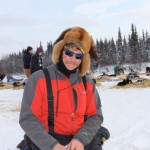 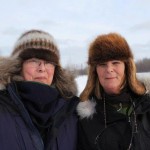 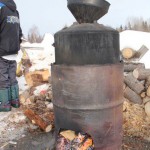 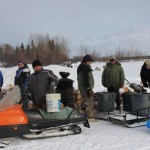 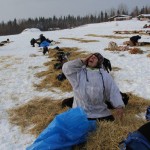 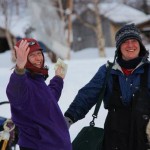