Into McGrath. We left right after Aaron Burmeister had left Nikolai. At times the trail was quite blown in, specially along the chain of open meadows and lakes.

While passing teams towards the front I started to realize that there was a pattern emerging: Lance Mackey, Dallas Seavey, Jeff King, Mitch Seavy, Hugh Neff, John Baker and Aily Zirkle, who was running up front about 20 minutes ahead of everybody else. We were passing no other than a row of CHAMPIONS. Each and every of those Top 7 teams have either won the Yukon Quest or Iditarod and some done so multiple times. This is no coincidence to have the Iditarod field stacked up like that. All of those 7 people are very driven individuals, who share a passion for success. And they know what it takes to get the job done. Each team looked well focused. Aliy wasted no time to snack her team as we passed. Fish was on the menue and every single dog gobbles up the slices Aliy offered them. A sign of success, hungry well trained dogs, run within their limits, with plenty of appetite. And attitude, as soon as we drove past, they started to bark and lunge.

There is for sure a tight race brewing here at Iditarod 2012. The teams behind those 7. No stragglers neither, Paul Gebhard highest placing 2nd…. No surprise neither to see him knocking on the front door. Ray Redington and Aaron Burmeister are right behind him, both having worked up the ranks in the standings, trying for that big victory. Aaron still driving a full string of 16. Jeff King and Mitch Seavey traveled within sight of each other. Mitch was sitting on his seat, no moving a muscle and must have had a huge grin on his face, of watching his beautiful team strung out infront of him. Jeff was patiently drafting of Mitch, having a bit of an advantage specially during the blown in stretches. I am sure at some point both will reverse their roles. Here in McGrath is the quite before the storm. Camera Teams were testing equipment. Race Judge Al Maple came walking on the inbound trail to make sure all is in order. Colored “ icelights “ were lining the trail. In a view minutes the Pen Air first to McGrath Award will be given out.

Passing some FINE teams on the way to Mc Grath, including the first 7 all being 1000 Mile Champions: 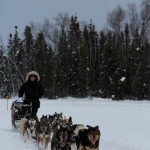 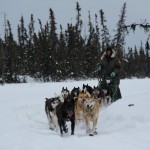 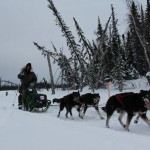 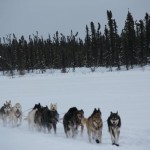 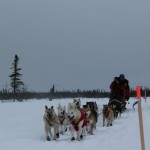 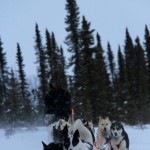 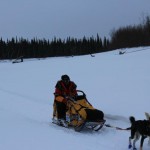 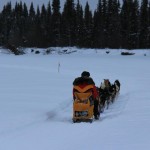 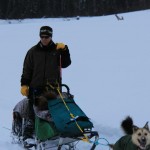 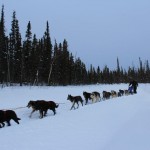 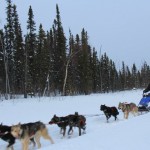 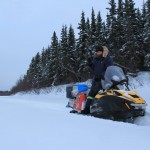 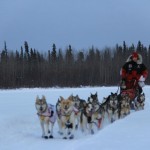 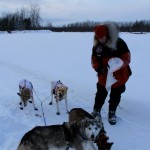 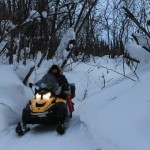 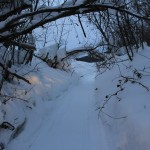