That seems to be the slogan of the back of the pack mushers. And that does not mean that the front musher do not have the same rule, its just that there are more experienced and confident in their own decisions, than mushers further back in the standing, who more often seek for a second opinion of a veterinarian or fellow experienced musher. Back of the back these days has also changed meaning. Passing Ed Stielstra from Michigan on the way to Takotna we exchanged a few words and Ed commented on the speed of this years race: “ Sebastian I have never been here this early and look, I am in 50th something place. “ That looks a bit different on the actual standings, with some teams resting in McGrath, as Ed is listed into Takotna as team no 35. Only 2 teams have left the checkpoint, being Martin Buser and his son Rohn. Both are some 8 hrs of the leading mushers pace, right now Mitch Seavey who can leave 3 minutes ahead of Aliy Zirkle.

In McGrath I talked with Mike Santos, who had his first showing in Iditarod end prematurely last year and is taking a bit more conservative approach. He was resting for a few hours in McGrath, although he planned to take his 24 hr layover only 18 miles up the trail in Takotna. Why? Because he felt his dogs needed that short break, and for the benefit of the dogs. The run took him more than 7hrs more than he had planned, so Mike opted to rest.

Same counted for Zoya Denure, who has finished the race once before in 2008. Her last 2 attempts she scratched in Rainy Pass both times. This year she seems determined to finish and make sure to apply a dog first approach. She rested in McGrath through the heat of the day and than plans to run to Ophir later today to take her 24 hr there. In the team I spotted a familiar face, a dog called Demon, who really earned his reputation. He came to them together with a whole bunch of other dogs in 2006 who were very poorly socialized. John Schandlemeier and Zoya Denure have worked with a lot of problem dogs and did once again a great job with Demon and transformed the aggressive and standoffish dog into a loving animal. Zoya and her team seemed in great spirits.

Takotna is the Iditarod hot spot right now. With 36 teams resting and more on its way. The dogs great some real quality rest here, all perched on a sunny, south facing hillside. Numerous hot water pots are non stop being filled with water and the wood fires are stoked. Vets are milling in between dogteams and giving the mushers advice on what to do. There is a lot of very large teams still in this race, some of them even still running the full slate of 16 dogs they started with, like Aliy Zirkle, Mitch Seavey, Ray Redington Jr and Aaron Burmeister. This will set those teams up for a very nice run on the second half of the race. They leave between 1 a.m. and 3 a.m. with is perfect timing for a long run towards Cripple, in the cool of the night. The talk amongst the front runners is where to rest, to avoid the heat of the day tomorrow and if it would be possible to make it to Cripple in one long run.

With the snow being exceptionally deep I will change my plans and head out ahead of the teams again. Passing is next to impossible without burying the snowmachine, so if I do not want to be in the mushers way, nor screw up the trail I need to make sure to stay ahead of them by a few hours. Cripple tonight, Ruby tomorrow night is the plan, than on the Yukon River Gerd and I should be able to leapfrog with the teams again. 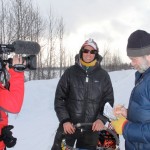 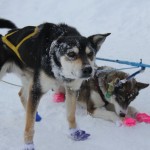 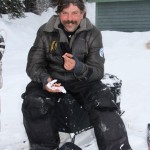 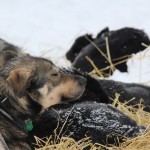 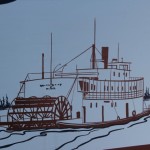 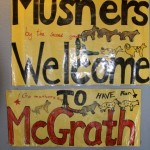 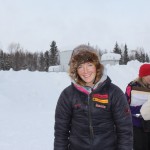 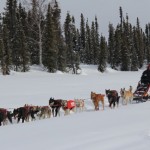 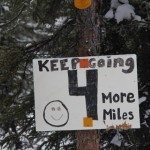 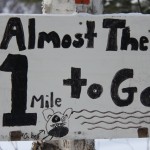 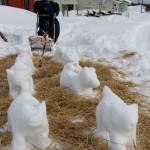 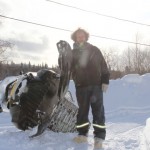