Mitch and Dallas both have separated each other from the field for now. They have done so, by just pulling off two very long runs into Ruby, only stopping in Cripple for about 4 and half hours. That is close to 160 miles total run. Now both are taking their 8 hours here, which gets them out in the early afternoon. At 2 and 3 p.m. respectively.

The chasing pack, Ray Redington, Aaron Burmeiter, John Baker and also Aliy Zirkle are now a bit behind. They have so far already rested 2 times on the trail. The only chance I see, for them to make up the deficit, is to now skip Ruby and run all the way to Galena to take their 8 hour layover there. From Galena than run all the way to Kaltag in one shot. If than Mitch and Dallas would both break the run on the Yukon River in two, resting on the trail between Galena and Nulato ( or one of the checkpoint ), by the time all 6 teams reach Kaltag, that could be there around the same time again. Time will now tell, who of the 4 chasing mushers will have the determination to skip Ruby. Both Ray and Aaron still run a full slate of 16 dogs. A team is only as fast as the slowest dog, so they might have to drop a dog or two, to now pull off two very long runs along the Yukon River. I can sure see John Baker doing the math along the run, and would be very surprised to not see him trying to stay close to Mitch and Dallas. Dallas Seavey commented on that: “ Baker is not fast, but Baker does not have to stop and that can be scary at times “. Conditions seem ideal. Word from the trailbreakers, which are not ahead to Galena, is that the trail has set up well and is hard and fast. There is no wind to speak of.

To me it looks like, that the mushers from 7th place on, starting with Jeff King, are now one runtime, about 6 hrs behind the leaders. At this point in the race, that is along distance to make up. Notably Jake Berkowitz, Pete Kaiser and Sigrid Ekran have done a push to the front, going from the high teen places to the standings of 10 to 12., while others like Gerry Willomitzer and Lance Mackey have fallen back, breaking the run into Cripple in two, and also resting in Cripple. Both rested longer than most other mushers, with Willomitzer 6 and half hours and Lance almost 10 hours. 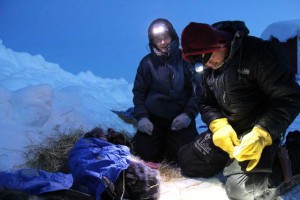