Jim Lanier is the first Musher into the Cripple Checkpoint. Under almost sunny skies his team was led into the checkpoint by a single leader. GCI representatives were at hand and to award Jim Lanier the Dorothy G. Page GCI Halfway award soon. Jim had chosen to first take care of his dogteam.

When talking to him, he mentioned that he originally intended to camp out, and than continue to Ruby for his 24 hr layover. That was until Joe Runyon planted the seed while talking to him in Ophir, that nobody had left for Cripple yet. He said he could not help but think about the gold waiting for him, so he changed his plan and continued all the way, just stopping several times for short breaks along the way. This is the first time, that he reached the half way point first, in a long career, which has started back in 1976 with his Rookie Iditarod run.

He was not the only musher having his eye set on the award, as Trent Herbst was hot in Jim’s heels, trying to get the gold poke again. Last year on the way to Iditarod Trent chased town Wasilla Musher Kelly Griffin to be the first into the Checkpoint. Both mushers will take their 24 hour break here and have ideal conditions. This spot can be very cold, but right now temperatures hover around the 25F mark and the sun has come out. There is a new mushers tent waiting for them, complete with oil drip stove and fully insulated. Ruby next? 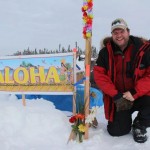 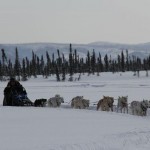 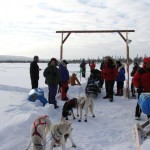 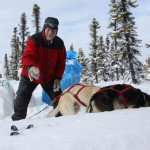 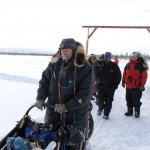 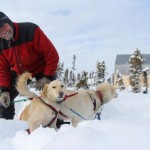 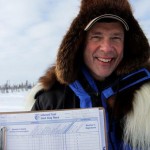 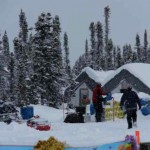