It is always exiting to get up first thing in the morning, with the wakup call: Sab, you have 20 minutes, than Aliy comes in. I have gotten used to the fact, that this means typically 5 minutes at best, and sure enough, I barely had clambered outside and saw her zoom around a 90 degree corning coming into the checkpoint, whith her trademark “ holy cow “ expression. That is a very nice looking dogteam she is driving. Aliy wasted no time, her dogs did not even go in the doglot, turned them around on the raod. Gave each a piece of Fish, which they all gobbled up. She had her vetbook signed, loaded a few more snacks and chuckled at the question if she wanted straw. She clearly does not intend to stop before Kaltag.

Than the second exiting thing of the morning: To take a look at the new Standing. Wow, where did Ramey Smyth come from? After running in the middle of the pack for much of the race, Ramey is once again storming to the front. Even more impressive is, that he passed some of the fasted moving teams of the race with Pete Kaiser and Jake Berkowitz, who themselves do a strong push for the front.

Long time traveling friends Hugh and Lance are both running further back, I am sure they are enjoying each others company, but most likely both wished their races would have turned out a bit different, as their pace has slowed and their dog numbers are reduced, compared to the front runners.

Ray, where I personally had hoped he would do a top 5 finish, has dropped out of the Top 10. He has fast traveling times with under 6 hours to Ruby, but is not quite running aggressively enough to keep up with the very strong pack. If he wants to have a chance at a top 10 place, he now needs to run nonstop to Kaltag.

Jeff, who was very confident in Ruby, that he still has a chance of winning the race, has cut his rest much shorter than the other in Galena, with resting less than 3 hrs. I fully expect him to now run through Nulato all the way to Kaltag. That would put him right in striking distance to the front. But with running the entire 150 miles of Yukon River on less than 3 hrs of rest, his speed might drop off a bit after that too.

Dallas is now running solidly in 2nd place, passing his dad who rested around old Bishop Rock last night. Mitch’s team has slowed down quite a bit and Mitch was already talking about that before he left Ruby. Sometimes I wonder, how much a mushers mental state, will actually show in the dogs performance. Whereas Dallas was upbeat and chipper and happy about his run into Ruby, Mitch was worried and not happy about that run. Their runtimes were only 17 minutes apart. Mitch saw the glass half empty. Dallas half full. I really think the dogs feed of that energy. I hope Mitch will come out of his mental slump.

John Baker rested longer in Galena than I expected. I saw him doing the same as King and rest less than 3hrs, instead of the 4.09 he took. That is by no means a long rest, but in this tight front field, half an hour or full hour counts a lot.

Dallas is around the corner, so enough strategie talk, time to snap a few more pics. 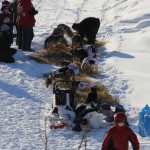 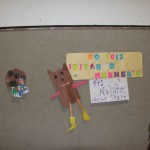 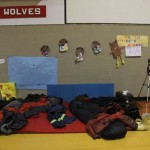 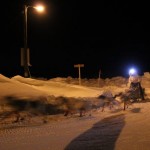 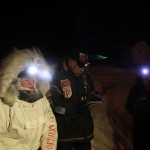 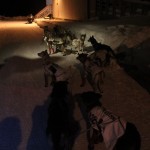 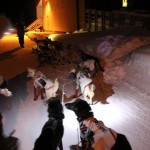 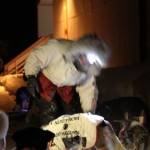 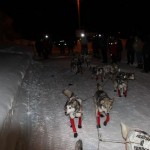 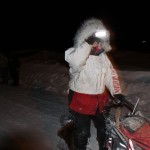