Today 66 Mushers, 15 Rookies and 51 Veterans line up on 4th Avenue to run their Iditarod Teams for 11 Miles through the heart of Anchorage. They can pick 12 dogs for this event and unlike during the rest of the journey, there is no solitude during the Saturday festivities of the Ceremonial Start. Snow has been trucked all night, fences been put up, Hot dog stands opening early in the morning. Fans all over town have been baking cookies, preparing their personal outings, painting signs for their favorite musher many days in advance. Others have booked hotels and airline tickets month in advance and flown in from all over the world, specifically to see the mushers prepare their teams for the journey to Nome. Yet many mushers have planned for years, all their time and energy leading up to this moment. Pull the hook, under the banner on 4th Avenue, to start the adventure of a lifetime.

Anjanette Steer is listed as a rookie. She has helped her husband Zack Steer, a perennial top contender 6 times to get his team ready on 4th Avenue. Now it is Anjanette´s time to fulfill her dream, of taking a dog team to Nome. Winning the Northern Lights 300 in late January she has shown, that being successful is a family affair. Zack´s highest finish was 3rd in the 2007 Iditarod, a year mushers had to contend with very low snow conditions for much of the way, bumping over bare ground, rocks, and tussocks in the Farewell burn and pretty much all the way to the ghost town of Iditarod. Anticipation will fill the Air on 4th Avenue, of the journey ahead, the unknown trail, the unknown conditions and the obstacles which are there to be overcome, for one and all to emerge as a winner, each in their own way, with arriving in Nome. For one day, before the real test begins, its showtime on downtown Anchorage´s 4th Avenue: The Ceremonial Start!

Over the years this developed for me into a much-loved event. Remembering back to the Iditarod 2005, my first running, I merely considered it a necessary evil. It’s taken me a few years to discover that a large part of running Iditarod is the celebration of a lifestyle. For many mushers Iditarod is that, a lifestyle, a chosen career path abandoning well-established livelihoods. Some mushers have been lawyers in their previous lives, like Vern Halter or doctors like Randy Cummins. Both are no longer actively racing themselves, yet their faces are found around 4th Avenue come Iditarod start. Its about meeting friends, helping friends who run Iditarod, reconnecting with fans and volunteers and simply being part of the extended Iditarod family.

Talking to Iditarod Veteran Ken Anderson, he stated that Iditarod is time to give back, not only to the community, fans and sponsors, also to the family who is often left alone, while the musher is out on long training runs during the fall and early winter. Ken Anderson is a 11 time finisher with 5 Top Ten finishes. 4th being the highest placing in 2008 and 2010. Having been at the starting line for over a decade he has used that opportunity to include his family into the excitement many times. Both his mom and dad rode his tag sled at one time or another. Of course his wife, Gwen Holdman is always on his side, having run both the Yukon Quest and Iditarod herself.

For someone like myself, where my family is further away from Germany, I only had that privilege one time with my dad joining me on my last run in the 2011 Iditarod. It took me quite a bit of convincing, to persuade him to take the long trip abroad in the middle of winter to see what the superbowl of long distance dog mushing is all about. My dad would have rather gone sailing. He was more than skeptical if it was a good idea to be amidst hundreds of barking dogs strapped into a sled at his sons mercy, navigating the streets of Anchorage.

Fear turned into joy quickly and although not speaking a word of English, he was fast at making friends. During the ride he frantically waived to the crowds of people. He was amazed by the excitement, the celebrations going on along the trail, and eagerly filled his pockets with cookies and Candy bars.

Sissy Adams, a local Anchorite had put up a “ Yukon Checkpoint “ along the trail, a “ must stop “ for teams from the Yukon Territory. We stopped the team, took pictures and of course enjoyed a bit more food, while other teams were passing along. At the end he was more than glad, that he had come all the way to Anchorage and wished he´d done it long before.

This seems to be the case with many of the visitors, who do come up here to take part in this great event. They come again and again, for many years. Be it as volunteers, just spectators or, as some, paying to ride in the mushers sled as an Iditarider. Two of those are Claudia Nowak and her husband Lee from Michigan. This is their 9th year as Iditariders. Repeat guests, are happy guests, right ? 7 of those 9 years Claudia rode with Michigan Musher Ed Stielstra. The only two years she rode with someone else, was when Ed was not running, they chose Pat Moon ( who ran a Stielstra team that year ) and than fan favorite Wattie MacDonald from Scotland. For my question of what attracted them to ride in the sled Lee had the following answer: “ It is the most we can participate with not being a musher. We can not get closer to the race, without getting our own dogs .” Both had tales to tell, when they fell out of a sled, missed the trail and had all sorts of misadventures. But those were the adventures they look for, being in the middle of the action. Originally Claudia had heard about Iditarod by reading Gary Paulsens book and wanted to first hand experience what Cordova hill was all about.

For people who do not have the financial means to buy a seat in a musher sled, there is still plenty of opportunity to not feel left out and also be hands on. The wheels of Iditarod would not turn, without thousands of dedicated volunteers. Therese Jordan from Minnesota and Robert Henrici from Massachusetts both work as security, making sure only mushers, handlers and media will be in the dog staging area, something which is appreciated by us mushers. While Therese is into her 4th year of volunteering, it’s a first for Robert, but he has been up here 25 years ago to help Norman Vaughn, as he was from his hometown of Hamilton. The fire of Iditarod has been burning all this time. It is the diversity of every musher they are drawn to and the enthusiasm of people with all the positive energy. Robert said: “ This Ceremonial Start is the lighting of the fuse, it gets people going “. Being a musher, I could not agree more.

A common theme which came up is, how personable the mushers are, how open and accommodating to fans, something not found in all sports. In return many friendships are formed. I still have contact with the 6 of my 7 Idiariders I had over the years. People like Ed Ward, who have done the holy grail of being an Iditarider, the Ultimate Iditarod Experience, are back for more. Ed, hailing from Alexandria Virginia, this year is riding with 2011 Yukon Quest Champion Dallas Seavey and calls himself a virtual groupie. What has him coming back, is the rapport he sees the mushers having with their dogs. “ I have never been around people who like dogs, I didn´t like. It is a sort of self selecting group. “ Ed commented on my question of why he came back. I think this sums it up very nicely. The ceremonial start is all about enjoying each others company, be it dogs or humans. Let the festivities begin and show the world this wonderful event. Iditarod 40! Happy trails to all. 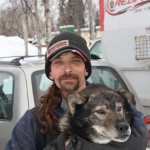 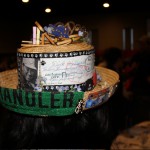 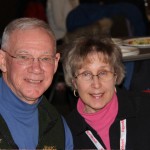 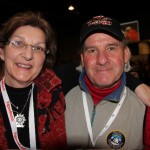 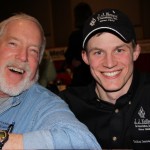 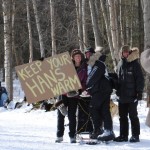 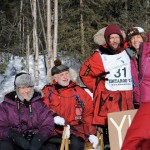 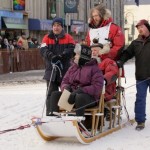 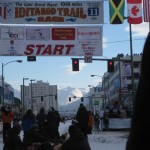