While nursing a very sick dogteam in the Nikolai Checkpoint and thus forced to run very slow and conservative, he is now putting on the heat. And the mushers he is leaving in his dust are some pretty big names, but also putting in some very incredible runtimes themselves. This shows how important it is in a dog race, to never give up hope, to always move forward and take care of the team you have. Anything in possible, same as us humans, the dogs will work through rough times. It is amazing how a dogteam can bounce back. And it is equally amazing, what a good musher can do with them. Ramey is super athletically fit. At any given time I either see him running, kicking or poling . His equipment is not state of the art, no fancy sitdown sled. Matter of fact not even a fold down seat on his old wooden sled. He is driving a sled many of his competitors would not even trust to take on training runs.

His team is led by two older dogs Zeus and Scott being 7 and 9 years old. That means they know where they are going, been here before and are used to Ramey´s strong pushes. Interestingly enough, 30th place in Takotna was only 5 hrs off the pace of the leaders. That also tells us another story, that many of the mushers push very hard early in the race, to than often fade towards the end. Looking at his dogteam outside, it also tells a story. While all others are a sleeping without blankets ( they do have dogcoats on ), Ramey´s team is covered in old woolen blankets, dogs not visible. He was short a blanket, so he used his down parka to cover up Zeus and Scott. Ramey is going all out, making do with what he got, and doing very well with very little. When I asked Ramey how things are going a few minutes ago:” It’s a story of survival “, which sums up his attitude very well. I am sure he will pick off a few more mushers before reaching Nome. 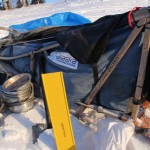