The push up the Coast. Trails have been very soft for the front runners, so a few more of them have been taking shorts rests along the way. Aaron Burmeister took 4 hours in Shaktoolik, while John Baker and Mitch only too about 2 hrs. Dallas took a 2 hour rest on the ice coming over here. The only 2 mushers who have done a hard push over to Koyuk are Aliy Zirkle and right now Ken Anderson is on his way. He is known to run strong on the coast and has set up his dogteam well to pull of a few long runs. After running in the middle of the pack for much of the race, Ken has now pushed his way into the Top 10, same counts for Ramey Smyth.

A funny side story: When Aaron decided to take a break a few years ago, he has skipped the last 2 Iditarods, he sold his team to Dallas Seavey, who is now leading the race. Coming into the Checkpoints, Dallas is running as single leader, called Elim, which is Aarons old leader. So it looks like he is getting beat by his own dogs. Aaron himself is running a new supestar lead called Ruger, a big 75 pound male, with a rather clumsy gate, but a big heart who puts it all on the line for Aaron, also arriving here in single lead. Aaron must have carried half a cooler full of food over from Shaktoolik, as he dished out a meal as soon as he arrived here. His dogs wolfed it down, little Moss actually getting into a squabble with her neighbor over it. Moss is the sister to Ruger, about half his size. Remmy is another dog of that litter, which I guess you know the theme by now, who has developed into a nice lead dog for Aaron, just being shy with people, he has to take him out of lead driving into checkpoints.

While Aaron is getting his snowsuit dried out, its soaking wet with sweat from him skipoling hard, Aliy and Dallas are both up and packing up, planning to leave soon. I think the race for 1st place in now between those 2 mushers. John Baker and Mitch Seavey are hot on Aarons hells. Peter Kaiser took an almost 3 hr rest in Shaktoolik, which will keep the speed in his team. Pete has been posting some very fast runtimes. I still think he is in the hunt for a Top 3 position. With 170 miles left, there is still quite a bit of ground to be made up. 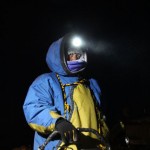 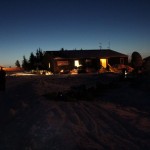 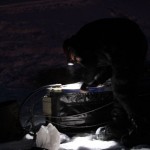